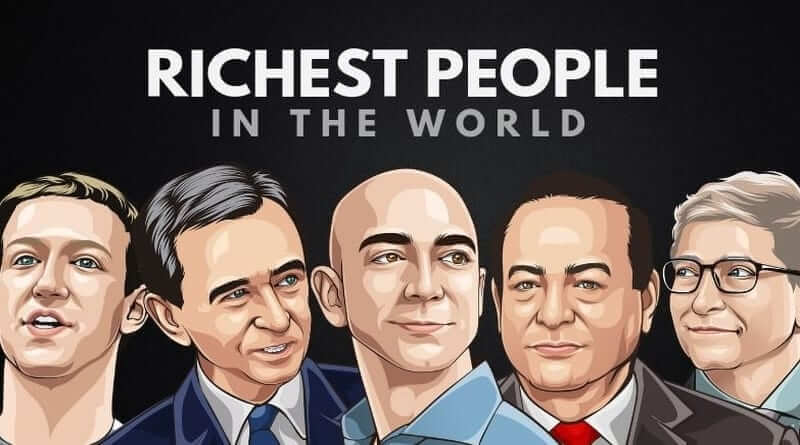 The real story is that most people run after money. But how many of those things can make you a really wealthy person? What you’re going to tell you about the world’s richest people who swim in the sea of money. This description is based on the revelations made by the well-known financial and business analytics magazine and the well-known website Forbes.

Of this list, 67% (1490) are self-employed, out of which 255 are women. 72 of them are born into poor families and are considered wealthy. It is noteworthy that the assets of billionaires are a trillion dollars.

Topping the list is Jeff Bezos, the owner of the well-known amazon company. He is also the world’s first billion-dollar billionaire with a net worth of $ 112 billion. His net worth is estimated at $ 39.2 billion over the previous year. Amazon’s revenue has also increased by 59% over the last year.

Bill Gates, the world’s richest man, has previously been $ 22 billion behind Jeff Bezos. His wealth has also increased over the past year, but that increase is not enough to beat Bezos.

Third on this year’s list is fellow American Warren Buffett, who previously became the world’s richest man. His net worth is $ 84 billion. Warren is a world-renowned investor and his number of international companies is said to be over sixty.

The 69-year-old French businessman Bernard Arnold is the fourth person on the list with $ 72 billion in revenue. He earned $ 30.5 billion last year alone. He is also the owner and CEO of LVMH, one of the world’s largest luxury goods retailers.

Mark Zuckerberg is the youngest of the first twenty wealthy

Mark Zuckerberg, the 33-year-old Facebook owner with $ 71 billion, is fifth on this list, and the youngest of the top twenty. In 2004, he started Facebook as a 19-year-old and turned it into the world’s most popular social network, dedicating his higher education to it.

According to this analysis, Ma Huateng is the richest person in Asia. The owner of Tencent, Asia’s richest and largest conglomerate, he is considered a giant in the tech world. His assets in the entertainment media as well as mobile phones are estimated at $ 45.3 billion. He is ranked 17th on this list.

Jack Al, the creator of the well-known Alibaba website, is the 20th on this list. He is the second richest man in China with $ 39 billion. Significantly, the number of subscribers to Alibaba rose by 79% over the previous year.

The richest women in the world

According to the list, the richest woman in the world is Alice Walton, an American with a fortune of $ 46 billion. She is now 69 years old, the daughter of the famous Walmart founder. Her two brothers, Jim Walton (46 billion) and Robson Walton (46.2 billion) ranked 14th and 15th among the world’s billionaires, making the Walton family the richest family in the world.

Former L’Oréal owner Lillian Bettencourt, the richest woman in the world, died last year, and her legacy is estimated to be $ 42.2 billion.

The fall of assets among many billionaires last year was also significant in 2018. Of those, US President Donald Trump is conspicuous by his $ 400 million declines. At the moment, his net worth is $ 3.1 billion and he is 766th on this list. This is a drop of 544 from the previous year.