Safe and efficient interaction with Cobot 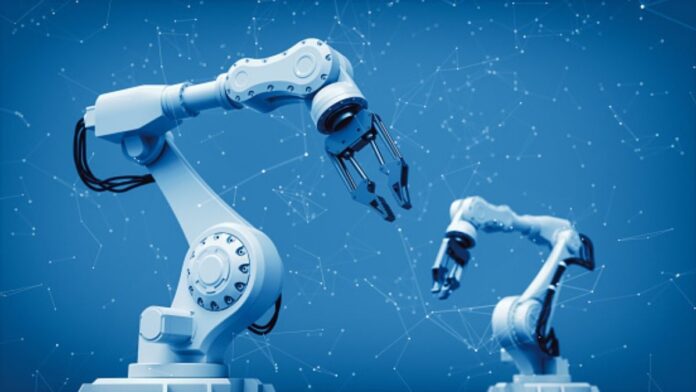 Cobots are flexible automation devices that collaborate with the human labour force to perform duties ranging from polishing and grinding to blood testing, machine tending, and even preparing coffee.

When it comes to collaborative robots, safety is a high priority to ensure an intimate and productive relationship between humans and machines.

This article discusses the various issues that arise in the implementation of Cobot, as well as several suggestions for development and factors to consider.

Cyber-physical Systems (SCF) combine and integrate physical processes with computational components and communication networks. They interact at various spatial and temporal scales with various operating processes. SCF also employs systems that interact and communicate with one another via networks and software.

The main purpose of Cyber-Physical Systems is to develop sensors to perform control actions, monitor, and generate new knowledge, self-learning and self-reconfiguration based on the nature of the process. The mobile internet has allowed the ease of adaptability, resilience, capacity, usability, and security of industrial systems.

The SCF played a key role in the industrial revolution because, in the past, there were no intelligent factories that enabled the interaction between production systems and people via a network.

Cobots are industrial systems or robots meant to function in robot-human contexts, meaning that they interact with human operators and allow the operator’s work to be enhanced by the machine’s capabilities. Cobots have been employed in the automobile sector, surgery, training devices, and rehabilitation, to name a few.

Collaborative robots are designed to solve the variations that occur in large-scale customization processes, a task that per-programmed robots cannot perform. Companies are quickly adopting the use of robots because they can work alongside people on the same assembly lines in small spaces.

Additionally, they require fewer security measures than simple robots, can work on short consignments without extensive programming and are ideal for replacing operators in recurring or poorly ergonomic tasks.

A Cobot’s programming process entails the ability to comprehend the status of the environment and take actions that get the system closer to a collaborative objective. The programming characteristics of collaborative robots include;

Communication: An operator controls a Cobot using a vocal (spoken) or nonverbal communication channel. The offline function of the programmer is to program and specify the anticipated actions of the Cobot, including the underlying motion control.

Optimization: Important components of a collaborative robots surroundings are mathematically represented based on the Cobot’s activities, such as impediments and tool locations.

These are the cost functions that are optimized to get desirable results. The Collaborative robot software can be used to reduce the operator’s burden, energy consumption, and lost time or to increase physical confidence, as well as product quality.

Learning: A Cobot learns a skill in the same way that a human does, for example, by watching demos, experimenting, receiving feedback, and asking questions. A programmer’s job is to create the learning algorithm and feed the collaborative robot with the first data. This could be in demos, training, and trial and error iterations.

Unauthorized access to confidential data (personal or company) or unauthorized management of manufacturing facilities is a digitization-related concern, with digitization affecting security. The proliferation of this information has transformed the nature of cyber dangers, making cyber-security risks critical.

Various organizations’ risk mitigation techniques are critical in lowering risks. Cyber-security is critical for the growth of digital industrial transformation because of the gaps and vulnerabilities created by inter-connectivity.

The examination of potential risks should be used to select a safety system to prevent accidents. Security systems have traditionally isolated workstations from machines and humans.

The UNE-EN 755: 1996 standard reflected one example of this division. It suggested that sensor systems should be utilized to prevent individuals from approaching a dangerous region where the robotic system’s operational state could have put workers at risk. Authorized workers can only be inside the robot workstation if the robot is not in automated mode.

Rules and types of cooperation

The robot’s load is corrected to retain its position during the operator’s manual control operation. Without causing a force majeure, the operator can freely move the manipulator in space.

The human comes into direct touch with the machine, but the operator controls the movement rather than initiated by the robot. The robot’s speed has been lowered for safety concerns, and it has been updated with safety features.

The robot must be fitted with a piece of measuring equipment to monitor the impact load. Sensitive devices (torque sensors) are integrated directly into the joints of some robots. A conventional robot can also be used for this type of collaboration.

A sensor that can recognize external loads must be installed on the robot. This sensor is located between the external device and the final effector on the robot’s wrist. Measure, analyze, and confirm the robot’s compliance with the load.

Collaborative robot study is a constantly changing field. There is no specific solution for enhancing the accuracy of intelligent human-robot robotic systems. This is because maintaining coordinated contact between the two parties is difficult. As a result, vital features are continually improved. These features include:

Despite its popularity in the current market, the adaptation of Cobots in manufacturing industries comes with various risks, including:

Collisions between humans and robots must be avoided in collaborative robotics and the industry context. It is critical to achieving safety standards because humans and machines work together in an unpredictable and time-varying environment. Improving the efficiency and performance of Cobots leads to increased productivity and a safer working environment, particularly in situations where human errors can impede progress.