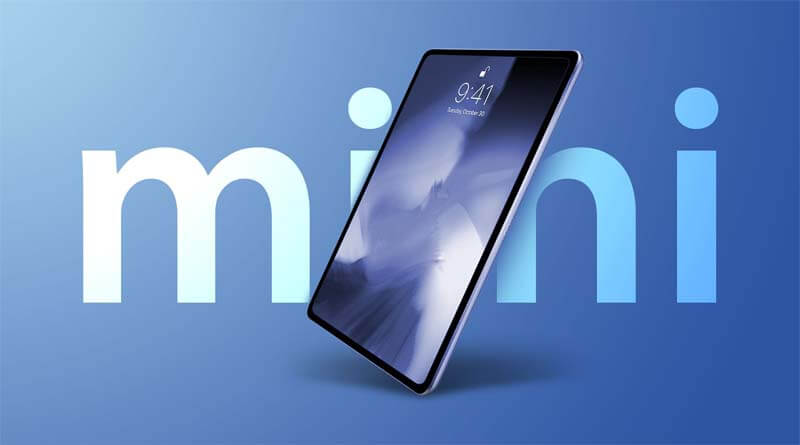 New iPad Mini Pro Launching in the mid of 2021 (Apple March Event 2021). There has been a lot of speculation around a potential march event from apple. Some rumors a few weeks ago said that it would be [su_highlight background=”#71f964″]held on March 16th[/su_highlight]. But that was quickly shot down by Bloomberg’s mark German.

However, he did not dismiss the idea of a March event in general. Just it’s not going to happen on March 16th. If an event was to happen this month recent trends suggest that it would probably be centered around the iPad.

Last year apple actually did a silent release of the new iPad pros alongside the new magic keyboard via a press release this time there have been some long-standing rumors that Apple could release a sixth-generation iPad mini as soon as this march. And another rumor that’s been gaining a lot of traction.

Recently is that Apple is also planning an iPad mini pro or an iPad pro mini uh but whatever the name might be, unfortunately. It seems as though that’s expected to launch later this year.

According to a post on a Korean blog whose rumor track record is well unknown, the device features an 8.7-inch display. Which is housed in a body that has an increased width and reduced height compared to the existing iPad mini 5.

Now I assume the design in my mind is just going to look like the current iPad Air and iPad Pro models with slimmer bezels that edge-to-edge screen design. And though his might seem like the iPad Pro might be in the name it’s possible that we’ll see face id over touch Id like on the air.

But that’s just my own speculation there have also been other rumors about this redesign iPad mini from apple analyst Ming chi quo back in may he actually said the next-generation iPad mini will have a bigger display coming in at around 8.5 to 9 inches.

So that rumor that we just heard makes a lot of sense and it also makes sense that a bezel-free design with no home button could help increase that screen size without actually making a huge difference in form factor.

Read Also: What are the five biggest technology trends for 2021 to rule?

Unfortunately, the more trustworthy rumors point to this being more of a later in the year release second half of 2021. So the iPad mini that’s rumored for earlier this year or potentially within the next couple of weeks is looking more like a refresh than something of a redesign.

So it’s probably safe to expect the same similar huge top forehead bottom chin bezels. You know a home button with Touch ID and the lightning port at least for this sixth generation.

Oh yeah, we should also probably see some new iPad pros did say that yet with all the new attention going towards a smaller mini version. We forgot about the big boys and it’s possible that the next iPad pros could come with the long-rumored mini led display.

5G connectivity now mini led for those of you who might not remember offers impressive wide color gamut performance high contrast. And HDR and local dimming dim the backlight behind black areas of the screen while keeping bright parts lit for truer blacks. Improved contrast also expects it to even be more powerful.

[su_quote]Bloomberg’s mark German said this year’s chip could be on par with the m1 chip in terms of performance.[/su_quote]

We saw in the latest max which is crazy fast for an iPad that’s already pretty crazy fast. It’s definitely more than capable of handling the final cut or logic pro. So maybe this year we might finally get an iPad version of those apps. However, I’m not holding my breath. And I’m never letting go of this dream.

I know there’s a lot of you out there who really want that to happen. I can’t be the only one okay one last thing we could finally see. And I swear this isn’t some long-standing joke to keep bringing up but air tags in the latest beta of iOS 14.5.

Which was beta 3 there’s a new items tab available in order to keep track of beats headphones or third-party accessories. It’s been a long-standing rumor that the new air tags can be managed in this items tab.

So if there was ever a time to finally release these little guys suppose a March event would be a good time or just anytime really it’s been forever.

I think people stopped caring about them if you want to know my thoughts. I’m just guessing here I’m, I have a feeling there’s just not going to be an event.

I think a mini-led iPad is certainly event-worthy but I could also just see apple going in the way of a press release again just kind of making a silent upgrade to the iPad mini nothing worth noting. And then just announcing air tags via the press release as well.