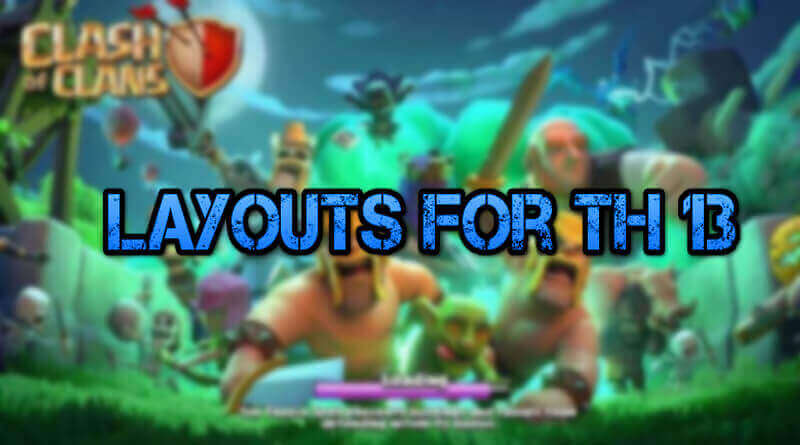 After the fall updates of the clash of clans, I think it’s time to update the TH 13 layout as well. We have fresh layouts for TH 13 in Clash of clans.

In this selection, I have included 13 fresh and handpicked 2020 TH 13 setups for the legendary league, which were meant to be anti-two, that is, primarily to save your Trophies. Anti-2 bases of this kind, in which the Town Hall is often hidden in the very center and surrounded by tricky combinations of fences, traps, and defensive buildings, show themselves very well in daily farming when you are attacked with unprepared universal sets or mixes.

The main calculation is that the enemy troops will not get to the center and will go for a walk around, therefore such bases are also called circular or circular, and sometimes square. Although I have added several so-called island bases to this collection.

If you are just starting your journey to the legend, then these layouts will help you get to it in the shortest possible time, i.e. successfully overcome the champion and titan league. On the approaches to the legendary league and at the initial levels of the legendary itself (up to 5200-5300 Trophies), in most cases, you will be approached by a pack of electric dragons, against which such arrangements work just perfectly.

Of course, do not forget that there are no perfect formations, and sooner or later, there will be some handy attackers who will take you three. However, your straight arms are also important, the more serious you take your attacks and the more three-ruble notes you have, the higher your final rating.

Clash of clans, for each base, as usual, I attach a link to which you can copy it directly to your clash, just make sure that no obstacles, decorations, and tombstones get in the way, and for convenience.

The design of this base may seem funny to someone, they say it is a troll base, but believe me, this is far from the case. An inattentive attacker will definitely not notice two tricky holes in the fence, covered by archers’ towers. This, by the way, can be seen in the video at the beginning of the article.

Classic! I have been using this layout for a very long time and I just couldn’t help but include it in this selection. Although you will hardly surprise anyone with it, especially in leg, you will take it without proper training and knowledge!

This was a fresh TOP 13 of the Layouts for TH 13 that you can use both to reach the Legendary League and in the Legendary itself. If you are interested in the layout for other TH, then you will find them in our special section. Take part in the survey at the beginning of the article and join us on social networks.